TIPS AND TRICKS HOW TO IMPROVE YOUR HOME

Introduction of bentonite types and their applications in various industries

The history of using bentonite powder in various industries such as oil and gas wells drilling, food, chemical etc. dates back to seventy years ago. Knight first used the word bentonite in 1848 in an area called Benton in the United States of America when he observed clay minerals with high plastic viscosity (Grim, 1953, p. 361). Bentonite mineral consists of a high percentage of fine-grain mineral that is Montmorillonite. In addition to the Montmorillonite, other minerals such as quartz, feldspar, volcanic crystals, organic materials, gypsum, or pyrite are also among the minerals that form bentonite. From the chemical point of view, Montmorillonite called hydrogenated aluminum silicates also, which consist of small amounts of alkali and alkaline metals. From the structural point of view, Montmorillonite mineral consists of two blocks, octagonal Aluminum plates, and tetragonal Silica plates which shown in figures 1 and 2.

Figure 1. the schematic of (A) octagonal unit, (B) part of octagonal plates structure.

A unit montmorillonite cell consists of two tetragonal silica plates with an octagonal aluminum plate between the two silica plates which is given in Figure 3. 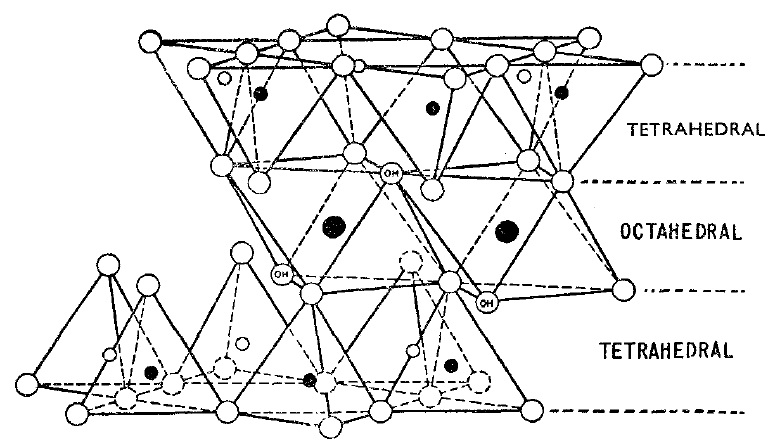 The montmorillonite has cation exchange capacity in the range of 70 to 110 meq per 100 grams of clay. The exchangeable cations have a great importance effect on controlling the physical effects of montmorillonite. Montmorillonite also has the property of absorbing water and heavy metals, which after absorption, the volume of Montmorillonite increases.

Application of bentonite in various industries

Sodium bentonites with high swelling properties is used in the drilling industry of oil and gas wells as drilling mud, retardant gels, and emulsion stabilizers, which require the most viscosity and gel properties. Sodium bentonites are also used in the pharmaceutical industry and in industrial fire extinguishers. While calcium bentonites are mainly used in various industries such as refining of industrial and edible oils and adhesive additives in the foundry and mold-making industries, as well as preparing insulation materials and animal feed, which sometimes has a special composition for sand that Containing cellulose additives requires a combination of calcium and sodium bentonites, which are mainly used in the concrete and ceramic industries.

Acid activated bentonite and its applications

Acid-activated calcium and sodium bentonites compared to conventional calcium and sodium bentonites in terms of physicochemical properties including crystal structure of smectite mineral, chemical composition, cation exchange capacity, adsorption capacity, specific surface area, surface acidification rate, power change Catalytic and porosity are different depending on the conditions of acid activation. Sulfuric acid is the most used acid to activate bentonite, which according to the molar concentration of sulfuric acid, different properties are emerged during the ion exchange process in calcium or sodium bentonite powder and have different applications in industry.

Using chemical analysis and X-ray diffraction test, the weight fraction of different minerals and elements in acid-activated bentonite powder could be measured. Also, using the surface adsorption and nitrogen desorption test, the specific volume of mesoporous and microporous can be measured. Electron microscopy (SEM) scanning and X-ray energy scattering (EDS) tests can also be used to compare the properties of acid activated bentonite and conventional calcium and sodium bentonite. By increasing the molar concentration of sulfuric acid, the mass fraction of the cations 〖Ca〗^(+2)، 〖Na〗^(+1)، 〖Mg〗^(+2)، 〖Fe〗^(+2،+3)، 〖Al〗^(+3)، K^(+1)، 〖Si〗^(+4)and 〖Ti〗^(+4) as well as mesoporous and microporous volume increases in acid activated bentonite. Applications of acid-activated bentonite for preparing pigmented soil, effective removal of organic pollutants from industrial phosphoric acid, treatment and bleaching of edible, vegetable and industrial oils, use as the soil in earth wells, clarifier of food products, treatment of industrial effluents Factories, petrochemical and nuclear, ceramic tile industries, production of colloidal particles suspended in paints, production, and supply of plant toxins, cellulose and paper industries and many other industries were mentioned.