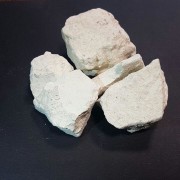 Sodium bentonite powder can swell up to several times its volume as it absorbs water, an outstanding characteristic which alongside its colloidal properties has made bentonite an exceptional choice for drilling; not only does it lubricate and cool the drilling bit, but also carry cuttings to the surface. What’s more, its thixotropic nature results in viscosity increases which in turn improve the carrying capacity in dynamic condition and keep cuttings suspended in static condition preventing them from falling back into the well in case of static operation. Bentonite is a cost-effective mud additive controlling fluid loss and maintaining filter-cake quality in freshwater and sea water mud. It is very useful in drilling top sections to seal and support the nonconsolidated formations layers like gravels and lose sand.

According to the National Geoscience Database of Iran, Iran enjoys more than 24 million tons of bentonite resources which are mainly spread throughout Isfahan, Tehran, Khorasan, Semnan, Markazi, and Yazd provinces, while in January 2016 U.S. Geological Survey, Mineral Commodity Summary, introduced Iran as the 8th global producer of Bentonite with some 430 thousand tons annually.

The abovementioned quite well approves Iran’s capabilities and potential regarding bentonite. NSR, with an unprecedented commitment to quality, the way our policy has always been like, have utilized this potential and is now more than ready to provide its invaluable clients with bentonite in full accordance with the widely recognized standards like API and OCMA. Consequently, if you are having any requirements for drilling bentonite, do not hesitate and shoot for the tried and true.